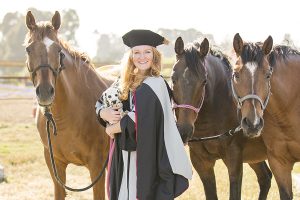 What was it like going to a school in the Carribean: I was on the island for school for the first three years.  Granada is a tiny island off the coast of Venezuela, so it’s really far south - and all the hurricanes miss it.  So we would study really intently for 6 weeks and then after mid-terms we’d hit the beach and it was amazing!  I wouldn’t have traded it for anything.  But the infrastructure there is dated - like 1930’s with no ventilators so with the pandemic they pretty much aren’t letting anyone back on the island at this point.

Future Plans:  I have a one year internship at Advanced Veterinary Specialists in Santa Barbara.  I’ll be rotating between medicine, surgery and emergency care.  My focus is on small animals.  I like that because I think as a Vet I can really have an impact on people’s lives.  People love their pets, they sleep with their pets - they get really attached, and if we can help their pet, we help them.  The other intern who’ll be there is one of my best friends from Vet school and we’ll be rooming together in Carpinteria.

How I was affected: I started out the quarantine at Cornell University.  We finish our 4th year of Veterinary School at schools in the states, but in March the school couldn’t allow students to come back onto campus.  During clinical year, it’s all hospital based and students weren’t allowed to come into the hospital anymore either.  We had a period of limbo while everyone was trying to figure out how we were going to finish out our 10 units and graduate until they made the decision to move us to (Cornell) online courses.  Meanwhile, there was talk about borders being closed.  Would New York’s state line be closed?  California?  I knew I needed to get back to California to start my job (which starts in mid June), and my dad has respiratory issues and my brother is in L.A. and I was thinking if anything happened to them or they got sick I didn’t want to be stuck in New York and not be able to get to them or at least nearby.

So I made the decision to drive across the country the last week of March - this was a week before they declared shelter in place in New York.  We were really careful, stayed at airbnb’s and then about halfway was the morning they announced that hotels were no longer allowed to accept guests and all campgrounds were closed.  We drove all day and had no idea where we were going to stay.  We got to Jackson Hole, Wyoming at about 9 p.m. and contacted a hotel and they fortunately made an exception and allowed us to stay there that night and rest.

The next morning we drove to Salt Lake City.  Everything was closed - there were no drive throughs open.  Later we were driving through a deserted resort town where we contacted an Inn and the man told us everything is closed, but I have fresh coffee - I’m happy to give you some if you want to come by and I’ll call a local cafe for you and see if they’ll make you something.  That chef said “look we’re not supposed to, but here - it’s on the house, here’s some food.”  It was amazing to get hot coffee and a great meal and a place to stay.

So I’m here now in Los Osos, staying with my good friend Megan, in a barn loft all to myself.  I self-isolated for two weeks after I arrived.  I’m really fortunate that this place to stay was available and she offered it to me.  I finished my online classes here.

Some of the emotions I have experienced during this shelter at home:  Roller Coaster!  From super happy that I have some time, that I can go for a run… and then super stressed wondering “am I doing enough?”  It’s a weird juxtaposition where there’s pressure to get work done, yet there’s time.

One positive thing was:  All the kindness we experienced along the way on the cross-country drive.

Some of your observations: People seem to be taking the quarantine seriously, but here (on the Central Coast) it’s not as stressful as New York was.  In New York there was a palpable undercurrent of uneasy tension with the unanswered “what’s going to happen?” (I left before quarantine started).  Huge supermarkets were all sold out and nobody was wearing masks at that point.

People look out for each other more.  With online school we’ve developed a habit of reaching out more and checking in to see if people need anything and instructors and classmates have been pretty easy to access.

I’m really grateful for the time I’ve had for longer phone conversations.  Having time to call my good friends and ask “how IS it going?”  So we’re isolated but we’re connecting.

One difficult thing was:  I feel homesick for my parents.  I miss them!  Not being able to see them has been so hard.   To have all these big life events happen and not being able to be with them - not having them be there - not having the graduation - the culmination of all that I’ve been through - without being together.  I’ve never experienced that before.  Getting the dog and seeing my brother last night - they should have been there!  It would be so worth it if nothing happened, but so not worth it if something happened.  My mom doesn’t like to talk about it.  I mean what do you do if you’re at risk and your daughter has a baby - you can’t go see and hold the baby!  Graduation is a huge event.  It’s symbolic to celebrate and pass through that doorway and it’s a family reunion - the whole family comes to celebrate with you.  The journey I took to get where I am today is so much more impactful when you have a graduation ceremony to mark it.

Something that Surprised me:  The journey my friend and I took back to California had so many transitions built into it, as we look back.  We took that journey and we talked about who and what do I want to be when I arrive; it felt like a metamorphosis.  And that became richer and deeper than any hour-long ceremony.  I try to take heart in that, since I’m not getting the graduation ceremony.

Something that stood out during this experience: There are so many silver linings.  I know people have had traumatic experiences and I don’t mean to discount that in any way, but I know I’m not the only person that’s wished that the whole world would just stop for a second.  Take a moment, slow down, think about what you want to do, what you need to do next.

New things since staying at home:  I decided to get a puppy!  I flew to Tennessee to pick her up and just got back with her, so this is all new to her.  She’s a dalmatian and her name is June Carter.  I don’t think she’s ever seen a horse before today.  The day I got here (to Los Osos) was the day she was born - April 1st.  About a year from now I hope she’ll be my running partner and hopefully Marathons will be back open again by then.

I think about:  The next four months; there’s still so much that has yet to be sorted out.  I think about “when will we have a family reunion?  When can I see my parents again?”  And anything can happen in between, so I try not to let myself think about that.

I notice:  People are getting tired of this.  And yet - when I went to Tennessee, they’ve already opened back up.  I was like alcohol wiping everything and wearing a mask and in Tennessee, nothing.  So it was weird to go from being super vigilant flying out there and then they’re not wearing masks and acting like nothing’s going on.  Chicago was fairly active - maybe ¾ back to normal?  LAX was slow but I arrived late, so it may just have been the hour of the day.  Oh and driving back from LAX I was going like 85 on the 405 - that was awesome!

Final Thoughts:  I’m just really glad to be back on the Central Coast (of California).  I’ve intended and thought about coming back the whole 4 years I was away.  It just feels great to be back.

My take-away:  Take it One Day at a Time.

After interviewing Lizzy I recommended Sharon Jentzen write an article about her journey.  You can read it here:  https://www.slohorsenews.net/to-through-and-back-to-slo-county-a-newly-minted-veterinarian-journey/