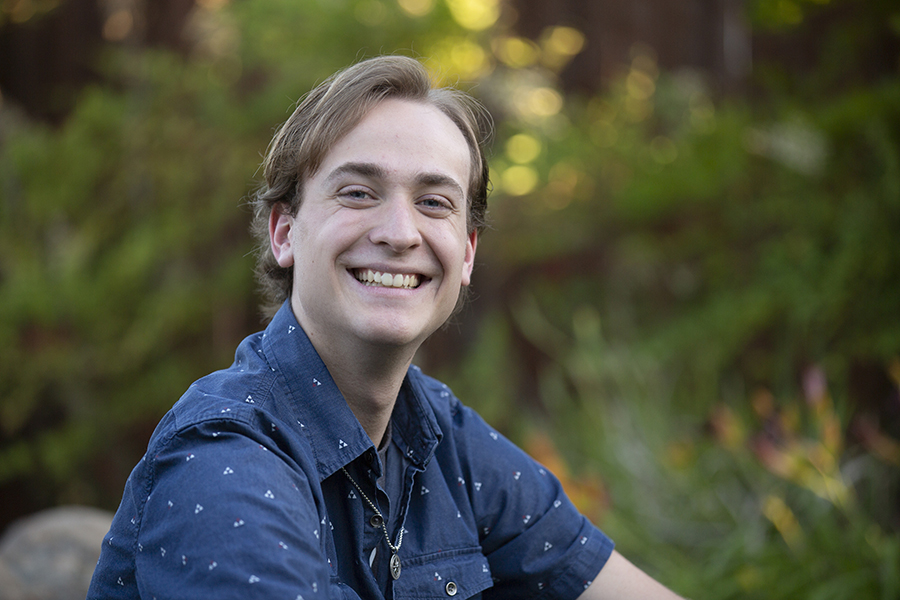 Future Plans:  Cuesta College to study Architecture and then transfer to a 4 year

How I was affected: At the beginning high schoolers were being high schoolers and making terrible jokes - it was going on half-way around the world.  Then when I heard about the first case locally I became worried.  The jokes stopped.  We hoped it would go away.

Our school does Mock Rock and has a talent show and I was planning on being in both.  My friends and I were going to do a Disney mash-up and we were super excited.  We started choreographing it.  We were two days into that when everything was cancelled.  I still want to video us doing it when we can get together again.

The musical has been postponed - Drowsy Chaperone - a musical that makes fun of all the musicals and I had the part of the Best Man.  We got all the way through run throughs and were about 2 weeks away from opening.  I’m still in denial about this - I hope we still get to do it!

I was looking forward to prom, but I did get to go last year, but we went with a group of friends, but this year I was going to take a date - oh well.

Some of the emotions I experienced when this all started:  Along with my fellow students, I experienced denial at the beginning.  I’ve never been in this kind of situation before, so the whole experience stands out.  I’ve had a very chill life.  This felt like a serious threat to the peace in my heart.  I felt uneasy immediately and probably that led to the denial.  After we knew school was closing I just accepted it.

What were some of your school activities:  I’ve been involved in band for about 6 years and recently joined drama and hope to do community theater in my free time going forward. In jazz band I played bass trombone.  In marching band I started out playing baritone and then switched to the tuba!  My parents put me in music to begin with, but I ended up loving it.

Some positive things were:  I got to skip some homework.  Then out of a challenge came another positive I think. I was excited about going to Fresno State to study computer science and live near my sister, and after the quarantine happened I thought about having college with virtual classes at home and I had to make the decision to not go to Fresno State because I didn’t want to spend that amount of money for online classes.  Plus I was questioning computer science as a career path, so this allowed me to really re-think and change course.

Another positive thing was I got a car.  My dad got a great deal on a car that needed some work and we originally planned to fix it up to sell it to get another car, and then for my graduation they surprised me and told me I could keep it.  I’m learning from my dad that knowing how to fix your own car is important.

Something that stood out during this experience:  Realizing how many people are affected by this.  Starting with my grandparents and how devastating this was (is) for older people!  My grandpa believes whatever he reads, and he’s a very social person, so he would read something and without being able to talk about that with others socially he would become very fearful because he’s believing what he’s reading.

Something Unexpected that I experienced:  How the whole community - everything - shut down and closed.

What was it like staying at home: At first I felt stuck at home, but there are much worse things. There was electricity!  I was hearing from my cousins about all the zoom calls they were having and we had no zoom calls, so I felt fortunate.  My classes were really relaxed and my teachers didn’t give us too much work.  I mostly studied for the AP tests.  Drama was obviously limited.  I did a video of myself doing what I would perform for a talent show - I sang Gaston as all the characters from Beauty and the Beast.

New things I did while staying at home: Some movie making, some baking (cookies!!!), some talking with friends… a while back I developed a hobby of making paper weapons so this came back out and I made a few paper swords out of paper and cardboard… and filmed a movie.  I enjoy writing movie scripts and making movies with my cousins.  I learned to write according to known resources:  my cast, what materials I have available and what I have access to.

Something that came out of this COVID time that you would like if it continues:  Watching church on t.v. on Sundays while enjoying pancakes in our pajamas.  It was much more relaxing and easier to be in the moment.

My values, upon reflection of life up to now: To always be myself.  People close to me tell me they admire that I’m true to myself.  I think it’s important not to conform to what others want you to do or be, but to follow your own interests.  Loyalty to those who love me.

Lessons learned: You don’t wait.  If you want to do something, do it.  You never know.  Don’t put things off.  My English teacher had us write an essay about what we learned in our 4 years of high school, so that’s what I wrote about.  My first 3 years I just didn’t do anything.  I wasn’t very social.  This year I wanted to go to all the dances I could and do things with my friends… and all the best stuff was coming in the second semester.  So my lesson learned is don’t wait.

My take-away:  Appreciate family time and time with friends.  It’s important to stay close to people.

Final Thoughts:  I want to make sure I don’t procrastinate in my life.  I want to go for it!  Go out and make memories!

Lori’s Summary:  Brady follows the flow and is good at finding his way and his part in what’s going on around him.  He has a tender heart and a lot of empathy.  He thinks with his heart!  He is very sincere and has really crossed the threshold of adult decision making.  He seems confident about going forward and setting himself up for being more flexible and being open to going along with the flow as it changes with the current level of uncertainty.